Home/Books/Life is a Game
Previous 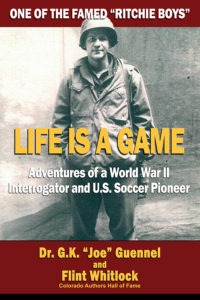 LIFE IS A GAME

Soldier, scientist, artist, author, and the Johnny Appleseed of American soccer: His was truly a “life in full.” German-born Gottfried K. “Joe” Guennel moved to the U.S. as a young teen. During World War II, he became one of the U.S. Army’s famed “Ritchie Boys”—a highly trained interrogator of German prisoners of war. Also an accomplished artist and photographer, he drew and photographed scenes of a war-ravaged Europe as he traveled from assignment to assignment.

At war’s end, he remained in Germany to interrogate suspected war criminals in advance of the Nuremberg War-Crimes Tribunal. He grilled arrogant generals and haughty industrialists and even the mistresses of Nazi bigwigs. Of Hedwig Potthast, Heinrich Himmler’s mistress, Joe said, “I found her unremarkable in every way.”

After the war, he returned to the U.S. and earned his doctorate at Indiana University in the field of Palynology—the study of ancient plants—that earned him a career with an oil company in Colorado to help it find places in the western United States where oil deposits were likely to be. But it was his love of soccer—the game he played as a young boy in Germany—that was his true passion. Starting the first soccer team at Indiana University, Joe went on to create soccer programs everywhere he went, especially in his new home state of Colorado.

Immersing himself in every facet of the game—from player to coach to referee to publicist to administrator—Joe helped the once-foreign sport grow into an all-American one that became one of the fastest-growing sports in the U.S. As a result of his untiring efforts to turn soccer into a mainstream American game, Joe was inducted into the United States National Soccer Hall of Fame in 1980. His 50-year-long friendship with Flint Whitlock, also an acknowledged “soccer nut,” resulted in the collaboration that produced this book.

Our job was to interrogate prisoners, not fight with them, and we had lots of prisoners, thousands of them. Prisoners would be searched after they were captured, and any documents they had on them would be given to prisoner-interrogation teams like ours to see if they contained any important military information. Then we would sit down with the prisoners, one on one. We’d offer them coffee or chocolate or cigarettes, try to get buddy-buddy with them in order to gain their trust, just as we were taught at Camp Ritchie. If they were wet and cold, we’d sit them next to a fireplace or stove and give them a blanket to wrap around themselves.

We’d start out by asking about their home life—where they were from, if they were married or had a girlfriend, what they did before the war, whether they had been drafted or had enlisted—things like that. Of course, we knew most of the answers because every German soldier was required to carry his Soldbuch with him at all times, and we had studied it.

If a captured soldier were hurt or wounded, our medical personnel took care of them, just as they would a wounded American or Allied soldier. It was one of the crazy rules of warfare—you go out and try to kill the enemy, but if you capture a wounded enemy soldier, you are required to treat him kindly, make sure he that receives medical attention, and that he’s well fed and clothed. The Germans were supposed to do this, too, when they had a wounded Allied soldier on their hands. For the most part they did. It was all covered by the Geneva Convention.

Many of the Germans we captured would express relief that they had been taken prisoner; it meant that for them that they were out of the war, and the fear of being killed was over. Tens of thousands of them were shipped to the United Kingdom and United States, where they spent the rest of the war in relative comfort in POW camps; most of them were very happy that they had not been captured on the Eastern Front by the Russians, who were notorious in their treatment of German prisoners. Once the war was over, they would be repatriated to their home countries.
*

In 1949, while attending Indiana University University at Bloomington, I decided to start another soccer team, just as I had done during my stint at the University of Missouri during ASTP in 1943. But now, with my bum knee, my playing time was limited—but I could coach. Thus, in the fall of 1949, the first Indiana University soccer team was born. It wasn’t an officially school-sanctioned, varsity sport—just a club team, but it was a start.

That first team was quite an international bunch. John Lynge, an import from Denmark, was the team captain. He had also served in the British Commandos during World War II, so I knew he was tough. Kok Joon Tan was a player from Singapore, and Peter Danielson had played in Norway. We also had three Iranians—the brothers Teimoor and “Fred” Vaziri, along with fellow countryman Michael Bit-Alkhas. Most of the rest of the team were Americans, including Len Kenworthy, from New Jersey; he had served in Patton’s Third Army during the war. We also recruited a Scotsman, Walter Hutchinson, to referee our home games.

In 1949 we played only two games, losing by a combined score of 14-0. But we stuck with it and trained together and got better, winning our first game in 1950 against Purdue, 5-3, in front of 300 fans on the IU football team’s practice field.

I produced five All-Americans during my IU coaching stint—Tom Morrell, John Hicks, Ghassan Omary, Joey Singer, and Ian Rothmuller. Well, let’s say they produced themselves; I was just the coach. But I’m proud to say that the school named its Most Valuable Soccer Player Award after me—the Joe Guennel Award.

“Life is a Game is the fascinating story of an extraordinary man who gave his all in WWII and also left behind a considerable sporting legacy.”

–Alex Kershaw
Author of The Bedford Boys and The Liberator

“Flint Whitlock scores again—this time with a fast-paced narrative of an incredible life! Joe Guennel was a Renaissance man who interrogated top Nazis for the U.S. Army in WWII, was an outstanding artist and scientist, authored books, and dedicated his life to the growth of competitive soccer in the U.S. Well worth the read!”

“Joe Guennel is truly a pioneer in the development of American soccer to where it is today a mainstream sport. Joe’s life was exceptional as an accomplished WWII veteran to being responsible for fathering numerous youth soccer programs. He was truly a giant of our game.”

“Wow! Once I started reading, I couldn’t lay it down. The great story of a man who not only served his country but served the communities wherever he landed. The most intriguing was the history of the war from firsthand experience—information only Joe could tell. This book also tells of the making of soccer in Colorado and the U.S. since its inception—and the many pioneers like Joe who made it happen.”

“We are fortunate for all the contributions Joe made to IU to help us reach championship success.”